Here’s Diana Trautwein’s riveting Christmas vignette,
the fourth* and final of our guest blog posts.
A Christmas Remembered
Christmas was one week away. As usual, I had more to do than I had hours in the day. Would I manage to keep all the plates twirling overhead as the final countdown loomed? Just the night before, our nine-year-old had played in a school concert; he complained that his foot hurt and I noticed that he limped as the brass section marched into place. 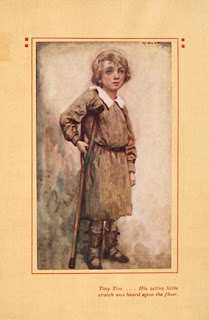 That morning, he clearly didn’t want to go to school; he was slightly feverish, so I told him he could take the day off, tagging along on my errands. “You can rest in the car at the grocery store, honey, but I’ll need you to come in with me at church. I’ve got a rehearsal for Sunday morning.”
As our trio sang into the microphone, I kept one eye on the balcony, where I watched Eric entertaining himself. My tall, lanky son was crawling his way around the balcony floor. “That’s odd,” I thought.
As we headed back to the car, I commented, “It looks like that foot is really hurting you. Can you remember anything that might have caused your ankle to twist?”
“It’s not my ankle, Mom. It’s my heel. The bottom of it is so tender, I can’t step on it at all.” That was odd, too.
At home, I took his temperature; it was now 102 degrees, triggering a call to the pediatrician. Dr. Graves was a large, kind, and careful doctor, never given to alarmism. She laid Eric out on the table, examined him and looked at me hard.
“I don’t like this at all. I don’t like the combination of fever and severe bone pain. I’m calling an orthopedist right now and I want you there ASAP.”
My heart sank. I had dragged this kid all over town. Could he be seriously sick? The entire orthopedic staff was out, having their annual Christmas party, but the doctor came back to see my son. He looked grave.
“I am admitting this boy to the hospital. Take him there now. I am certain that he has osteomyelitis, a serious infection of the bone, and he needs to be on IV antibiotics immediately. You can count on a three-week stay.”
Three weeks??
Now thoroughly frightened, I called my husband and then admitted our boy. We took turns returning home to tend our two older daughters and to pack a few things; we would need to trade off nights at the hospital for as long as it took.
Suddenly, all those plates spinning around in the air came crashing down around my feet. Presents still to buy and wrap? So what? Christmas baking unfinished? Too bad. All of it went on permanent ‘hold’ as we contemplated our son’s illness.
We had called our church prayer line as soon as Eric was admitted and we knew our large circle of family and friends was praying for our boy. We spent our time talking with medical personnel, arranging for our daughters’ care, accompanying Eric to all of his tests and scans.
The orthopedist said, “It’s too risky to cut into his foot for a culture, so I’m guessing the cause of this infection. I’ll try two drugs that should make a difference - IF I’ve guessed correctly.”
We gulped and nodded, hoping that he was as good as his reputation. We sent up wordless cries to heaven as Eric was hooked up to his IV tower, and we began to wait.
A bone scan had revealed a hole the size of a quarter in the bottom of his left heel. Something was literally eating his bone away. He and his dad had taken apart an old jungle gym the week before and both of them had used their feet to kick at rusted joints. We guessed that the problem had its source there.

But the outcome? Completely unknown from day to day. At day four, another series of x-rays and scans were taken. The hole had shrunk considerably! And the pain and fever were lessening. Thank you, Lord! The doctor was astounded at the speed of Eric’s recovery, commenting that the Christmas spirit had accomplished something medicine alone could not.
We took him home on Christmas Eve, two full weeks sooner than expected. He was on crutches for Christmas morning - but he was home! The baking was still undone, the presents were not wrapped - but none of that mattered. Our family circle was complete; together, we opened the last window on the Advent calendar, welcoming the Babe of Bethlehem to our world, grateful beyond words for God’s gift of antibiotics and for well-informed guesses!
You’ll enjoy Diana’s blog, DRGT/Just Wondering.* She’s a deep thinker and eloquent writer, a woman after God’s own heart.
*Links and resources:
Samantha’s Christmas story,
http://spiritualmemoirs101.blogspot.com/2011/12/samanthas-christmas-story.html
Kathy’s Christmas story,
http://spiritualmemoirs101.blogspot.com/2011/12/kathleens-christmas-past.html
Nancy’s Christmas story,
http://spiritualmemoirs101.blogspot.com/2011/12/nancy-fransons-christmas-vignette.html
Diana’s blog, DRGT/Just Wondering,
http://drgtjustwondering.blogspot.com/ 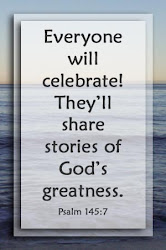 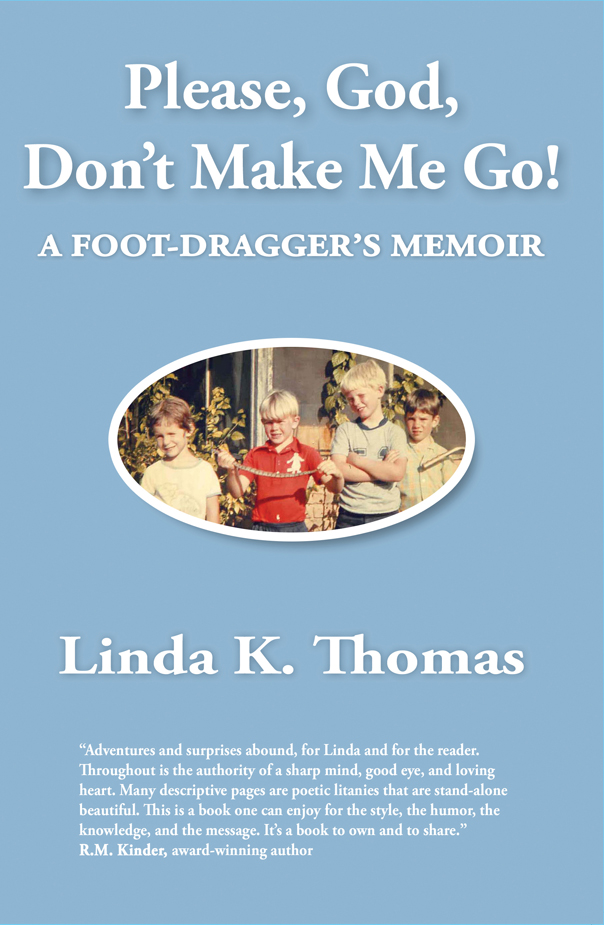 What’s a comfortable—and cowardly—suburbanite to do when her husband wants to move their young family to Colombia so he can teach missionaries’ kids?

Linda K. Thomas has always planned to chase the American dream. Adventure doesn’t appeal to her, and she’s ill-equipped for missions work. She prays, “Please, God, don’t make me go!” but after months of soul-searching, she hears Him say “Go!”

So, with flimsy faith and wobbly courage, she sets out with her husband, Dave, and their kids on a life-changing adventure at the end of the road in the middle of nowhere.

But when culture shock, tropical heat, and a certain boa constrictor threaten to undo her, she’s tempted to run away and hike back to the U.S. Instead, she fights to settle in and soon falls in love with her work alongside modern-day heroes of the faith disguised as regular folks. God has sent her where she didn’t know she wanted to go.

Once life is under control and easy, she gets a surprise—an invitation to one of the world’s most dangerous drug-dealing regions where hundreds of people have lost their lives. The country is perilous in other ways, too. Marxist guerrillas don’t like Americans, proving it with bombs, kidnapping, and eventually murder.

Linda doesn’t trust God to help her make the trip, and she can’t trust herself, either. Gripped by anxiety, she longs to stay in the only safe place, the mission center. Again she prays, “Please, God, don’t make me go!”

In this heartwarming, sometimes humorous, sometimes shocking memoir, you’ll walk alongside a young wife and mother as she faces two universal struggles: (1) choosing between her plans and God’s, and (2) choosing faith and courage over fear and cowardice.

This compelling memoir will inspire you to cancel membership in the Society of the Faint-Hearted, take a trembling leap of faith, enjoy God more, and relish the adventures He dreams up.

Unless otherwise noted, all contents © 2018 Linda K. Thomas. If you quote this blog, please cite and provide a link back. Thank you.

All I ever wanted was to live a quiet, secure life in a little white house with a picket fence and a rose garden, but my husband Dave—a free spirit who seldom limits himself to coloring within other people’s lines—and our adventuresome God had other plans. Just when our youngest finished college, both Dave and God hollered, “Africa!” You can read about my adventures in Grandma’s Letters from Africa, by Linda K. Thomas.

Grandma’s Letters from Africa received Editor’s Choice, Rising Star, and Reader's Choice awards from the publisher. In addition, the book will soon be listed in the Barnes&Noble.com Special Collections Boutique.


What others are saying

Grandma’s Letters from Africa is an engaging, memorable account of Linda’s years in Africa. It was a privilege for me to read over the shoulders of her granddaughters as Linda tells her story through a series of letters. Through both laughter and tears, she learns to balance her roles as missionary, wife, mother, and grandmother. In the process, Linda falls in love with Africa, its people, and her work. Readers will be moved by this compelling story that reveals God’s heart and extraordinary grace. (Bob Creson, President/CEO, Wycliffe USA)

Swinging on a vine in the Kakamega Rain Forest